Capture and Release explores fire as an energetic event with devastating residues, especially in relation to the history of fire in the Australian bush. Several hundred leaves were collected from fallen eucalyptus tree branches in the bush near Bogong Alpine Village in the Victorian Alps on 22nd October, 2016. These leaves were then dried and burnt either individually or in bunches of two or three back at home in Newtown, New South Wales, on 25th February, 2017. The energy released was captured by a photovoltaic (solar) panel but rendered as audio. The remaining ash, burnt leaves and twig fragments were then bottled, labelled and returned to Bogong in April 2017, accompanied by an audio work produced from the solar panel recordings, and exhibited as part of PHANTASMAGORIA.

This work was produced with the support of naturestrip as part of a residency programme, undertaken at the Bogong Centre for Sound Culture. 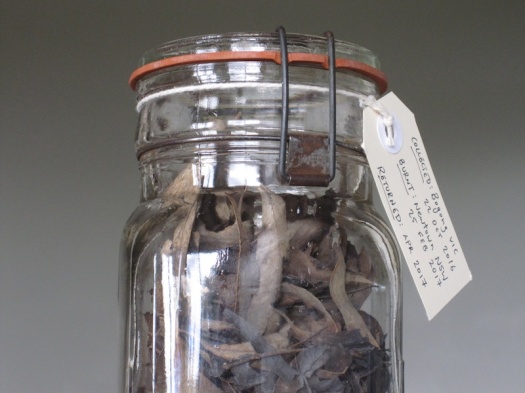